The Department of Linguistics, Deccan College, Deemed University organized and successfully completed a five days workshop on ‘Facets of Multilingualism’ in collaboration with Maharashtra State Faculty Development Academy, Pune from 18 to 22 July 2022.

India’s society, culture, history, and politics have continuously been shaped by the multiplicity of her languages. The country is aptly described as a linguistic giant. According to the 2011 census, India has 121 different mother tongues spoken across the country. Presently 22 major languages are acknowledged as scheduled languages of India. Multilingualism has been the result of population movement in and across this fertile land since time immemorial. Numerous socio-religious groups and their varied cultural heritages have resulted in assimilation and the creation of the multilingual canvas of India.

This course was designed to be useful to teachers and researchers from related disciplines of sociology, anthropology, psychology and education in understanding the role of language in the teaching-learning process with special emphasis on multilingualism including the cultural, and educational dimensions of multilingualism. Three sessions were scheduled on different aspects of multilingualism every day over five days. These various sessions highlighted course has thrown light on the variegated history of multilingualism in India and its diverse aspects. The sessions included discussions on the constitutional status of Indian languages, bi- or multilingualism in individuals and the community, multilingual competence, multilingualism in India, multiscriptality, understanding of identity through the lens of multilingualism, technological aspects of multilingualism, psycholinguistic and sociolinguistic aspects of multilingualism educational dimensions of multilingualism. The various themes were discussed by renowned linguist including Prof. Pramod Pandey, Prof. Imtiaz Hasnain, Prof. Rajesh Sachdeva, Prof. Ramesh. Dhongde, Prof. D. Vasanta, Dr. Ramchandra Bhavsar as well as faculties of the department  including Prof. Sonal Kulkarni-Joshi, Dr. Rahul Mhaiskar, Mr. Sambhaji Jadhav and Mr. Satish Bangar over five days. The sessions were conducted in Marathi, Hindi, and English. Teachers and researchers from higher educational institutions across the state registered for this course.  Course participants also benefited from interaction with experts as well as questionnaires, readings, and practical demonstrations provided in the sessions to encourage participants to plan their own research projects. Prof. Pramod Pandey (Vice-Chancellor, Deccan College, Pune) welcomed participants and presented inaugural talk. The inaugural session was attended by Ms. Anju Uppal (Jt. Director, MSFDA), Sujatha Varadarajan, Centre Coordinator, Centre for Multidisciplinary Curriculum & Pedagogy, MSFDA and Prof. Sonal Kulkarni-Joshi (Academic Coordinator, Deccan College). The course was coordinated by Dr. Rahul Mhaiskar and co-coordinator Mr. Satish Bangar. 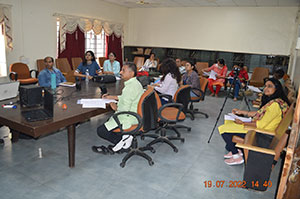 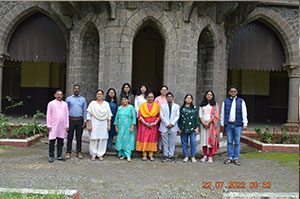 A LAN-based interactive language laboratory equipped with software such as Multi speech, Praat, and Wave surfer was set up in the department in 2007 with a grant provided to the department by the University Grants Commission of India. The laboratory is used to complement classroom teaching in Phonetics and Applied Linguistics and also in short-term courses conducted by the department

The LDG is a forum for students, research scholars and teachers in the department to interact and discuss Linguistics outside the classroom. The group meets on Friday afternoons during a semester. Invited lectures by senior linguists, presentation of unresolved problems/on-going or finished research by faculty and students in the department, group discussion of current debates and published research papers are some of the activities conducted under the LDG.

Taking cognizance of the interest in Linguistics from various quarters of academe, the industry and society at large, the department organises the following short-term courses:

Taking cognizance of the changing language needs of the industry, the department has since 2006 organised short-term courses for the general public in Computational Linguistics, Phonetics for corporate language trainers and a course in Phonetics for school-teachers will soon be organised.

A national seminar was held in January 2006 to celebrate the birth centenary of the father of modern Linguistics in India, Dr. S.M. Katre. Both the HRD Ministry and the Central Institute of Indian Languages, Mysore had extended financial support for the organization of this seminar.

In November 2007, the 3rd International Conference of Austro-Asiatic Languages (ICAAL), which had participants from Australia, the UK, the Netherlands, Thailand, Cambodia as well as scholars from the Indian states, was also successfully organized by this Department. The 30th All India Conference of Indian Linguists was hosted by the department in November 2008 to celebrate the Golden Jubilee of Postgraduate teaching in Linguistics in the Department.